Home > Blog > Article on Karen’s Experience with the Tarot-“The Tarot: Psi and Symbol”

Article on Karen’s Experience with the Tarot-“The Tarot: Psi and Symbol” 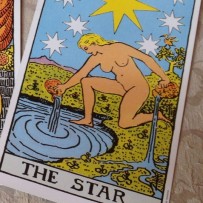 In 1994, Dr. Thomson was both an administrator and a Full Professor of English in the University System of Georgia, Kennesaw State University. In addition to her academic career, she also worked as a metaphysical healer and reader, and she taught classes in yoga and meditation, dream interpretation, and a variety of other metaphysical subjects, most often through KSU’s continuing education programs. In 1995, she resigned after 20 years of full-time college teaching (19 years at KSU, 1976-1995, plus 1 year at Dalton Jr. College, 1973-74) to pursue her interests as a metaphysical intuitive—a reader, teacher, healer—and as a pianist and creative artist. Nearly 20 years later in 2014, she continues to find immense satisfaction in her work.

The following article was re-edited in 2013 for use in Karen’s Tarot classes and on her website.

My first psychic reading in 1976 was given by Atlanta clairvoyant Laverne Hall, who at that time used the Tarot cards. I had recently finished my last stint in graduate school and was looking for a job when some trusted friends suggested I get a reading from a psychic. The subsequent reading accurately provided information–past, present, and future–about what were, to me, very important issues, concerns, and relationships in my life at the time.

Among the many predictions this gifted Tarot reader (and later my teacher of the Tarot) made that day were that I would have two job offers in June of 1976, that I would take the second offer and begin the job in September, that my full-time work eventually would be in the “metaphysical” realm, and much to my further surprise, that one day I would be doing just what she was doing–reading Tarot cards! She also “saw” my wedding, about three years away.

What happened was exactly as she told me. With my Ph.D. in English, I had applied to various places for a teaching position that spring. Two months after the reading, which was the first week in June, I did indeed have two job offers: one at Georgia’s Brunswick Jr. College and the other at Kennesaw Jr. College in the Atlanta area. Because my home was Atlanta, I chose Kennesaw and began my 19-year career there in the fall as a member of the faculty. It was at the college that I met in September of 1977 my husband-to-be, a colleague from the mathematics department, and we were married approximately three years from the time of the reading. At the present time [1994], though I have a full-time commitment to Kennesaw State College, I also do extensive metaphysical work, including Tarot readings, which I have been studying and practicing since the summer of ’76.

In my research as an English professor, which led to papers and presentations at academic conferences on the Tarot along with other metaphysical subjects, I was impressed with how some of the great minds in literature and psychology found the Tarot not only to be interesting subject matter they used in their work, but also a profound source of symbols or archetypes, as psychiatrist C.G. Jung would have put it.

Although it is not known exactly when and where the Tarot originated, it is recognized as being ancient. Among the legends is the story that Egypt was its birth place and that the Gypsies (from “Egyptian”) brought it first into Israel, then into Greece, and eventually into Western Europe. One of the more fascinating myths about the Tarot is that when the great library at Alexandrea was destroyed, the city of Fez (now in Morocco) became the world’s intellectual center. Because the wise men who came there from all parts of the globe needed a common language with which to communicate, a picture book of mystic symbols was created. To preserve the secrecy of their meanings, the symbols were made into cards and used in supposedly trivial games of chance. This is still how one part of the Tarot, the Minor Arcana, is used–namely, in playing cards.

The Tarot deck consists of 78 cards and is divided into two parts, the Major Arcana and the Minor Arcana. The Major Arcana is composed of 22 cards whose symbols are rich in symbolic and mythological figures, such as the Fool, the Magician, the High Priestess, the Lovers, the Hermit, Wheel of Fortune, Justice, the Hanged Man, Death, the Devil, the Sun, the Moon, and so on. As my mentor, teacher, and friend Laverne Hall used to say, the Tarot cards function as “the loose-leafed book of life,” or in the words of Joseph Campbell, as “the hero’s journey” to enlightenment. It is also helpful to think of the Tarot as representing the spokes of a huge wheel (the Wheel of Fortune) upon which each of us journeys, and through experiencing the pits and valleys, the ebb and flow of life, we learn, grow, and evolve–or not.

The Minor Arcana is still very close to the playing cards of today. The four suits, however, have slightly different symbols and each suit features an additional court card, the Page. Instead of diamonds, the Tarot has pentacles, hearts are cups, clubs are wands, and spades are swords. These in turn symbolize, respectively, earth, water, fire, and air, of which the universe is said to be created. In readings, the presence or absence of certain suits is an indication of what is happening in terms of events, relationships, and issues in an individual’s life.

The great mythologist and writer Joseph Campbell studied and used the Tarot. Jung, also, incorporated the Tarot into his work on human psychology and archetypal symbols. In the Introduction to Sallie Nichol’s book Jung and the Tarot: An Archetypal Journey (1980), we read that Jung

…recognized at once, as he did in so many other games and primordial attempts at divination of the unseen and the future, that he Tarot had its origin and anticipation in profound patterns of the collective unconscious with access to potentials of increased awareness uniquely at the disposal of the patterns.

It is interesting to note, further, that some of the finest and most highly respected minds from the literary world in the 20th century show a keen knowledge of the Tarot. W.B. Yeats, who won the Nobel Prize in Literature in 1923, had an intimate knowledge of the Tarot, as evidenced in his poetry. The same is true of T.S. Eliot, who won the Nobel Prize in Literature in 1948 and who, in Part I of The Waste Land, gives us the 20th century’s most famous clairvoyant, Madame Sosostris “…known to be the wisest woman in Europe,/With a wicked pack of cards.”

More recently, award-winning author Anne Tyler (author of Breathing Lessons and The Accidental Tourist) in Searching for Caleb and Pulitzer Prize winner Marsha Norman in The Fortune Teller use as main characters very likeable contemporary women who are themselves card readers. In Searching for Caleb (1975), Madame Olita explains to the main character Justine how a psychic card reader (in this case, using ordinary playing cards) is able to do a “reading”:

These cards are not read like books, you know. They have meanings assigned that you can memorize in half an hour, but ambiguous meanings…You must think of these cards as tags…Tags with strings attached, like those surprise boxes at parties. The strings lead into your mind. These cards will pull out what you already know, have failed to admit or recognize. Which is why palmistry works as well, or tea leaves or the Tarot or crystal ball. They all have validity, yes, but only when coupled with your own intuitions. (136-37)

Why do the cards “work” as a psychic tool? First, the Tarot pictures, as archetypal or universal, stir the deep recesses of the unconscious to bring about greater awareness and the heightening of one’s psychic consciousness and sensitivity. Jung’s concept of synchronicity may be at work as well. Synchronicity, as Jung defines it, is the descriptive term for the link between two events that are connected through their meaning, a link that cannot be explained by cause and effect. “Meaningful coincidence,” then, is what happens when the cards are laid out: synchronistically, it is often a snapshot of the moment of the future and is recognized as such by the Tarot adept.

Is there any danger in Tarot readings? Obviously, some readers are more sensitive, accurate, highly skilled, and ethically motivated than others, and one should seek out these kinds of readers. The best thing to remember, however, is that no matter what the reading, the individual receiving the reading must recognize his or her own free will, insight, and power. Provided that one takes full responsibility for his or her choices or actions, readings can serve to provide insight and an increased ability to make wise choices.